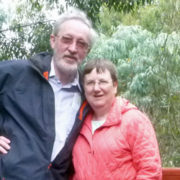 John Thomson has recently retired after nearly 40 years in the computing industry. Having graduated in computing science in the eighties, he has held many positions, in large and small businesses, including being managing director for over a decade of a 12-man software team. His work specialised in communications software, mainly for the military and aerospace market. He and his wife Myra took a career break in the nineties and spent six years doing education, relief and development work in one of the world’s poorest nations, in which their technical and people skills were put to very good use. Having become a Christian in his youth, he’s been involved in quite a few roles in a number of different styles of church. They joined SCF a couple of years ago when they moved up to the Angus Glens from Edinburgh.

We use cookies to ensure that we give you the best experience on our website. If you continue to use this site we will assume that you are happy with it.Ok